Below, you will find what we call a “Talk Board.” We saw this idea in use with a quadriplegic in a nursing home. The resident could not speak and visitors would communicate with her by using a chart similar to this one as a guide. This idea has application in many settings as long as the patient is alert and able to move their eyes, raise a finger or toe, or grip a hand. Often, people in intensive care units at hospitals have ventilators in their throats, and this would be a useful way of talking with them.

As the directions on the chart indicate, turning the eyes up means “Yes” and turning the eyes down means “No.” A “no eye movement” response can mean, “I don’t know.” This method can be modified to the abilities of the individual.

It works this way: the visitor calls out, or points to, one row at a time, going slow enough for the resident to respond or not. When the row number is called out that has the first letter of the word the resident wants to “say,” the resident will look up. Then the visitor will begin calling out the letters on that row until the resident raises his or her eyes again. When the visitor gets good at it, he or she can begin to intuitively “guess” the next line number, the next letter in the word, or the word itself . . . something like the game “Charades.” You may want to have your copies of the “Talk Board” laminated at a local copy shop to keep it usable. 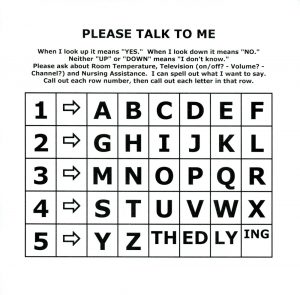